Music: Nina Simone, Anthology
Menu: Saag Chole, yogurt, tortillas (I had some that needed eating, but splurge on naan or chapati if you can!)

One of our recent culinary goals is to start cooking more Indian.  We LOVE Indian food.  And I have gotten the hang of making beginner style Indian meals.  In other words, I can make a mean curry, I have a basic stocked pantry, and an understanding of the flavors.  I have now entered phase two.  Phase two means advancing my pantry with whole spices, attempting ghee, and attempting to make homemade naan!  So, here is the first step to the addition of some yummy cumin seeds in this beautiful Saag Chole!

As you can see I have a bottle of cumin seeds.  I need to get whole coriander seeds, but the cumin seeds have made a HUGE difference already in flavor compared to using ground cumin!

This dish was quick, easy, and full of flavor and nutrition.   I used two packs of frozen spinach and two cans of chickpeas, too!  Next time I make it I will make a few changes…the first being coconut milk.  After I got everything in the pot, I added about 1/2 cup of water, I suggest replacing that with lite coconut milk.  The dish is pretty rich as is, so lite would be just fine.  I remember having Saag Chole at my fave Indian restaurant here in Denver and the dish being creamy and almost the consistency of a dip.  So, I did a bit of mashing towards the end to try to get this consistency, but I think coconut milk would go a long way.

A little bit about the music choice…in addition to loving Indian food, we also dig Nina Simone in a big way.  If you haven’t listened to her, do it.  Seriously, do it.   Now.   She’s known as a jazz standards singer, but she goes far, far, far beyond that (see Funkier Than a Mosquito’s Tweeter).  Her take on the standards are different (Feeling Good); her deep, melodic voice gives these songs an emotive quality unattainable by other singers (Black is the Color).  Beyond the familiar, the “High Priestess of Soul” was also an accomplished pianist, composer, and civil rights activist – a truly musical chameleon who embraced all styles and never shied from expressing her womanhood (I Put a Spell on You),  her beliefs (Let it All Out), and the undeniably passionate and soulful instrument which was her voice.

The Anthology album is a great compilation of both standards and originals and a perfect way to dip your toes into the wonderful world of Ms. Simone.  The only song that is missing, which I highly suggest you check out, is Baltimore. 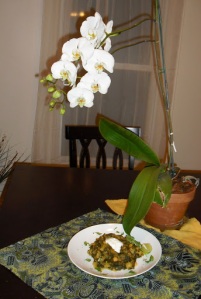 We are a sustainable family run farm in Upstate SC specializing in pasture-based animals/protein. "Nourish your body, excite your taste buds, give back to the earth." View all posts by callywoodfarms